A Square Meal for a Good Life

Life is challenging enough for those of us who have the good fortune to eat three square meals a day.  Imagine what it would feel like to go to school or to work every day on an empty stomach? The handicap of hunger can be compared to a runner trying to compete in a marathon with weights attached to his or her legs. 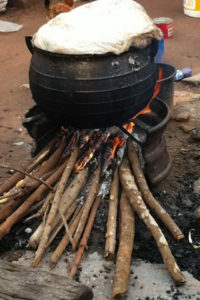 Dough cooking as part of the preparation of Kenkey, a traditional food in Ghana

A meal of fish, vegetables, rice, and an orange slice is a feast for someone living in the small village of Otinibi, Ghana. Thanks to the efforts of TPRF and its Food for People initiative, three hundred children and fifty adults in Otinibi will receive nutritious meals on a daily basis. Meals will consist of a high quality protein combined with fresh vegetables, fruit, beans, and locally popular spices.  The Ghana facility is expected to begin serving by September 2011.

When the farming season is successful, the people of southern Ghana like to eat Kenkey as a staple meal.  It is prepared from fermented ground white corn (maize). To make Kenkey, the corn is first ground into flour and mixed with warm water. This mixture is allowed to ferment for two to three days into maize dough.

The fermented dough is kneaded until it is thoroughly mixed and slightly stiffened, after which it is divided into two equal parts. Next, one part of the fermented dough is partially cooked in a large pot of water for about ten minutes, stirred constantly and vigorously, after which it is combined with the remaining uncooked dough and mixed well. The cooked half of the dough is called “aflata.” The aflata-dough mixture is then divided into serving-sized pieces and wrapped tightly in banana leaves, cornhusks, or foil. The wrapped dough packets are placed on a wire rack above water in a large pot and allowed to steam for one to three hours, depending on their size and thickness. The final product, Kenkey, is served with a sauce or any fish or meat dish.

Kenkey is one of the traditional dishes that will be served at FFP Ghana, prepared to maximize its nutritional value.

Thanks to the generous contributions from individuals throughout the world, the Food for People project in Ghana is blossoming. TPRF and the people of Otinibi thank you for caring.