Back to Bantoli (Part One)

TPRF, in partnership with the Premsagar Foundation, opened the first Food for Peopl facility in India in June 2006, in the northeastern village of Bantoli. Bobby Hendry recently visited there and submitted this account of his observations. Here is Part One of Bobby’s report.

In 2006, the facility had been an impressive new building situated in a rather hot, dry, treeless landscape with large, smooth, grey rock formations as the main feature. Unbelievably, the area around the facility now appears to be very fertile, having been watered and well cared for. This is evident by the abundance of half-sized, well-shaped trees, mature bushes and colorful flowerbeds planted around the whole compound.  There are also many new fields full of crops right next to the kitchen. The locals till and plant the fields, with a percentage of the vegetables going to the kitchen for tasty, organic subji (various vegetable dishes) for the children’s meals. 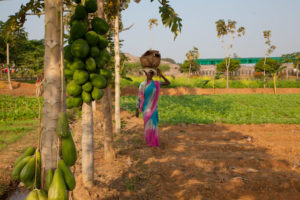 I noticed that designated areas around the compound are well cared for with many similarly sized small stones painted white lining the pathways, flower borders and parking areas. The whole area is well laid out, lush and eye-catching.

The facility itself is very clean, inside and out, with a well ordered routine much in evidence. When the children arrive, they form neat queues and wait to wash their hands before sitting down in their designated seat in front of a large screen showing cartoons and programs about geography. After a few minutes, the attendants call the children, row by row, to get their thali (rimmed plate) filled with rice, dal, (dried peas, beans, or lentils) and subji. They can return for seconds if they like.

I also noted that there is no need to enforce the system. The children follow it automatically even while chattering non-stop. They do not dilly-dally. They depart for school quickly after finishing their meal. 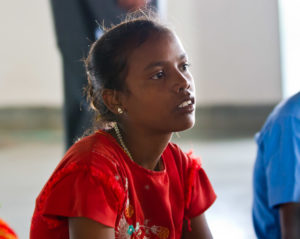 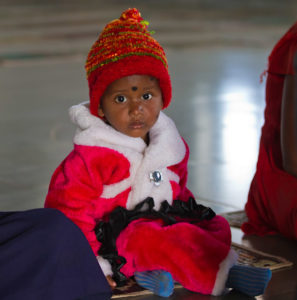 Pawan Kumar, the former manager of the facility, translated for me while I took some time to interview a few of the children. I first spoke to Beena Kumari, about 7 years old, from Murkatti, a village 4 kilometers away. She is sitting next to her cute little sister Priya, about 3 years old. Priya is dressed in a very sweet, highly incongruous Santa outfit. Beena, with her two sisters and two brothers, has been eating at the Bantoli facility since 2006. Beena tells me that she usually starts school at 6 AM. She then walks back for breakfast at 8 AM. Her father is a laborer in Ranchi during the week and comes home on weekends. She said the food is good, but she would like more sweets.Pawan Kumar tells me the kids are wild for salt. They put lots of salt on their food, even before tasting it.