Back to Bantoli (Part Two)

TPRF, in partnership with the Premsagar Foundation, opened the first Food for People facility in India in June 2006 in the Northern Jharkand village of Bantoli one and a half hours by car from the city of Ranchi. Bobby Hendry recently re-visited the facility and reported on its progress. Here is Part Two of his report:

Next, I interviewed two boys together, Ajay Munda and Purshotam. The former FFP facility manager, Pawan Kumar, told me that despite the same surname and similar looks, the boys are not brothers. They are both from the same village, Amalia, about a half kilometer away from the facility. I asked them what they did when not in school[?]. They replied that they help their fathers on the family farms. Occasionally, the boys’ parents also eat at the facility. 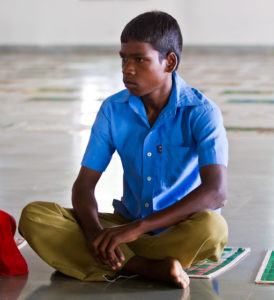 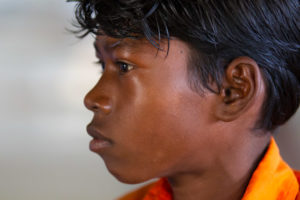 The boys told me they like the food very much, but they would like more sweets. They mentioned one local sweet in particular called Balusahi. It is made from maida (white flour), oil, water, and sugar mixed into a solid dough and deep-fried in the shape of a small donut. It is then soaked for a while in dense sugar syrup, strained, and allowed to drip dry. I tasted one. It was delicious, but I realized that one must eat the sweet with caution—rest is needed afterwards because of fat and sugar overdose!

Next, I met seven-year-old Sumanti Kumari from the village Bujyatoli. Small and neatly dressed with a shiny face and ready smile, she told me that her parents, grandparents, two sisters and three brothers all eat at the facility. She has been dining there since 2006.

Sumanti also expressed a desire for more sweets, even though she was happy with the food served at the facility. I learned that the children prefer rice much more than rotis (classic unleavened thin flat breads).

Lastly, I talked to a 12-year-old boy named Chan Mahali. He has two sisters and three brothers. Chan told me that he has benefitted greatly from eating at the Bantoli facility since it opened in 2006. He also said that he wants more sweets.  Chan plans to go into the army when he grows up. 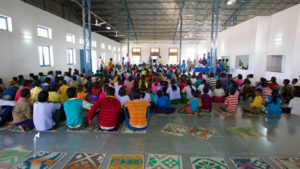 The big surprise of my visit was the continuing cleanliness and orderliness of the whole facility, inside and out. I went back there after four years expecting to see some wear and tear to the building and a drop in hygiene and service standards. I found this not to be the case. Everything is actually better than when the facility first opened.

Another wonderful thing was the children themselves. I remember the day the facility first opened. The kids were subdued, unsure, hanging on to each other, and all going for big second helpings. This time I saw very orderly, chatty, laughing kids who knew the routine well, with surprisingly few going back for second portions.  I took this as a sure sign they felt secure in the fact that more food awaited them the next day.

Then, Pawan Kumar told me something interesting. He said the whole area is very dangerous with dacoits (bandits) roaming everywhere, especially at night. If the bandits stop anyone from the Bantoli FFP, they always let them go on their way unmolested because of their understanding and appreciation of the good work being done at the facility. 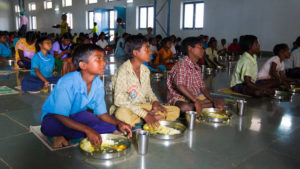