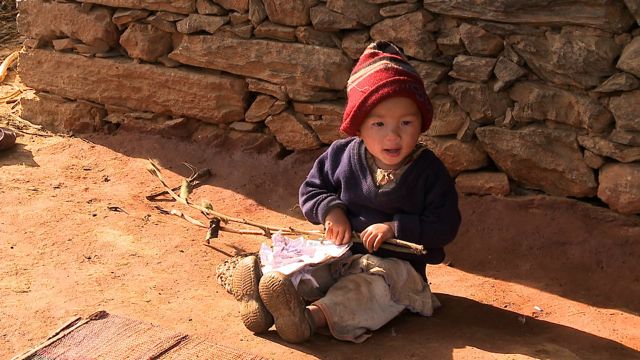 Bobby Hendry oversees meal planning, hygiene, and staff service procedures for the Food for People facilities currently operating in India, Nepal, and Ghana. Below he reports on his surprise inspection of the FFP in Nepal. It seems he was more surprised than the staff and children!

We depart at 5 a.m. as our car climbs the Kathmandu Valley summit on our way to the Food For People facility in the Dhading district of Nepal. After navigating an obstacle course of road construction through the valley, we merge onto the Old Main Road that stretches as far as India. It’s extremely steep. The incredible panorama brings alternating feelings of awe and anxiety as large trucks zoom downhill in the opposite lane.

Three hours later, we ascend to the mountaintop perch of the FFP facility. It’s looking better than ever. We drive past a smiling female gatekeeper and park the car. There’s no time to stretch as the view captivates me immediately. “Wow!” is the only word that pops out. Inside, I admire the ubiquitous shiny floors. The place is an immaculate well-ordered operation. 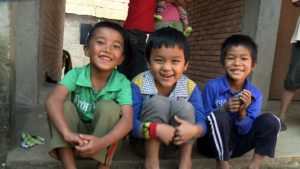 Children arrive at 8:30 a.m. They wash their dusty feet and hands before entering. Knowing the routine so well, they don’t even stop chattering as they head upstairs to the dining room. The Manager, Raut Bhola, tells me that the red-shirted kids are from a school nearby. The blue-shirted kids, including a few toddlers, travel over two mountains and valleys to get here.

Sitting on individual mats, the children devour huge portions of rice, dhal, and vegetable subji.  Before the facility was built, attendance at school was 10-15 per class. Now, it’s up to 40-45. A total of 400 students receive daily meals here. FFP also provides meals for 50 to 60 elderly people. Food isn’t the only sustenance they receive. This is a communal gathering place where they can enjoy each other’s company.

The Dhading region is home to the Tamang community. Until now, they’ve been considered a marginal group of uneducated Aboriginal natives. For the students, FFP has broadened the hope and scope of their future–and, as a result, for their families, as well. 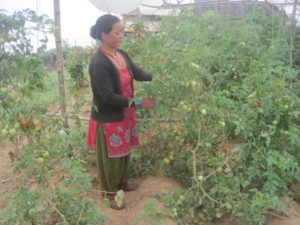 Not only is Mr. Bhola the manager, he’s also a gifted gardener. He invites me to view his efforts, exuberantly pointing out that everything he grows is organic. The terraced garden abounds with Swiss chard, tomatoes, broccoli, cauliflower, and root vegetables. In a 10-foot-high hydro tunnel, built of bamboo and black plastic, compost bags hang from the ceiling, sprouting Inoki mushrooms. “Everyone loves the taste,” Bhola says. “Button mushrooms are common in the valley, but not the Inoki.”

To reach the school, we trek along a steep, rough path on the side of the mountain. I experience vertigo every time I look sideways. The building is impressive, but modest. A dusty little playground is wedged between the school and a cliff, with a dramatic drop to a valley hundreds of feet below. There’s no fence. Chasing each other, the surefooted kids—unafraid of heights—appear to have innate motor skills that tell them when they’re too close to the edge. 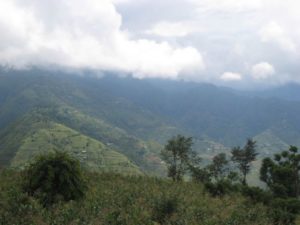 They exercise before classes. I wonder if any will pass out from the huge meal they’ve just had.   The English teacher tells me that they have so much energy after eating, the exercise helps them calm down before studies.

On the journey back to Kathmandu, I reflect on the foresight and vision Prem Rawat had for Dhading’s Food for People facility. And what an incredible privilege it was for me to be involved with its development.