Growing Up in Ghana

TPRF has chosen Bernard T Modey as the Project Manager for the Food for People development team. Here is Bernard’s story in his own words.

I grew up in a small town in Ghana. My father, of blessed memory, was an ex-soldier (World War II) who became a schoolteacher. He did not allow us to play as much soccer and other games as we wanted, like our neighbors. My mother, who had ten children (with me being number six), turned 82 last August. She was a petty trader who cooked and sold kenkey, fried fish, agbali-kaklo and other things.

As a boy, I attended Mawuli School, an Evangelical Presbyterian Mission boarding school at Ho. It was in my fourth year at the Mawuli School that I saw a friend one afternoon holding a magazine and heading to the Students’ Common Room. I walked with him until he reached the Common Room where about five other students sat waiting for him. I sat down with the other students and they read from a rather worn out magazine about Prem Rawat. For some reason, I became interested, and now I am so happy to be involved in this project which he inspired. 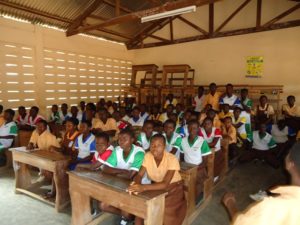 I was very anxious to excel in school to justify any expenditure that my not-that-rich father spent on me, so I kept going with my education.

I graduated from Kwame Nkrumah University of Science and Technology, in Kumasi, Ghana, with a Bachelor of Science degree in Electrical Engineering. I later obtained a Master’s degree from the University of Saskatchewan, Canada in 1988. (Oh God! It was so, sooo cold, but I survived.) I also have an MA degree in Economic Policy Management from University of Ghana.

Today, I am a 53-year-old Electrical Engineer working with the Ghana Grid Company as a senior manager. My professional experience has prepared me well for the opportunity to manage the Food for People project in the village of Otinibi.