PEP volunteer Chip Presendofer provides us with a unique perspective on the steps he and a dedicated group of individuals have taken to launch a PEP program in Berks County Jail, Pennsylvania. The group is currently working on launching a second program at another Pennsylvania jail. This is part two of the story.

On August 2nd, two PEP team members met with the volunteer coordinator at Berks County Jail to look at the classroom and confirm a start date on August 9th. The classroom we chose was large enough for twenty students. On Friday, August 9th, we held our first class. Seventeen inmates attended. 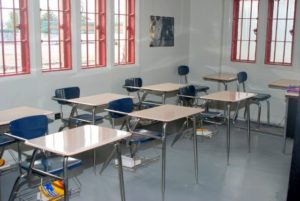 After all the students arrived and took their seats, I briefly told them we were going to play a video to give them a sense of what was going to take place and then I would take attendance. All eyes seemed to be on the screen at the beginning of the class. It was easy for the students to relate to the prison scenes and the inmate interviews kept their attention.

I took attendance by calling out everyone’s name and tried to make sure I pronounced the names correctly. Prior to putting in the first video, I thanked the students for coming and said that the information they were about to see was directed to them as human beings. I asked them to try to listen without comparing it to anything they had heard before. Then I pushed the button on the remote and the class was underway.

The class proceeded smoothly, although it seemed the longer videos challenged some students’ attention spans. Experienced PEP volunteers had advised me that it would take a few classes for the energy in the room to jell and for people to be comfortable enough to ask questions and expose their thoughts.

The inmates came from different cellblocks. Some knew each other (fist bumps) while others were not acquainted. In general, the inmates had no trouble finding seats and being in relatively close quarters. They were orderly, quiet, attentive and helpful. Perhaps in our next class, I’ll invite them to share a little of what they heard and hopefully get them a little more involved.

Before we knew it, the class was over. After replacing the tables and chairs to their original positions, all the inmates wound up standing in a circle around the perimeter of the room. The atmosphere was instantly more relaxed and one man asked whether a person without a conscience could find the peace within. I said those are two different things. Consciousness is being aware of your existence and conscience helps us distinguish between right and wrong. I said I didn’t think a person without a conscience would seek the peace within, but I didn’t really know. He thanked me for being honest with him, and then he said he was just trying to sound smart and not to pay him any mind. I said I was just trying to sound smart also, and that got a laugh from a few people. It was the first time during the class that it felt like we might have connected a little more on the personal level.

I received another important piece of advice from my fellow volunteers: It’s important to connect personally with inmates without getting too involved. That advice makes a lot of sense to me. The students don’t have to like us individually, but they should know we relate to them as human beings, not as prisoners. This is a fine line, but one that holds significant promise for us as facilitators. If we respect the inmates, there’s a good chance they’ll respect the volunteer team and feel comfortable enough to reveal their thoughts in class. I don’t feel it’s my place to draw the students out, but I do feel like I need to create an environment that will allow them to open up if they wish.

The ability to walk out of the prison made me realize how fortunate I am and what a privilege it is to be able to make my own decisions about my day. Driving home, someone asked me how I felt, and I answered, “Relieved and curious.” Relieved we had broken the ice and now had an idea what we needed to do for next week and curious to see who will return.

With only one class behind us, we have many, many more to go. This is a marathon, not a sprint, and one lit candle can light hundreds of others. We’re on our way, and for that I’m thankful. Looking back, it took a lot of effort to get the program started, but the journey has just begun and the bulk of the effort is still in front of us.