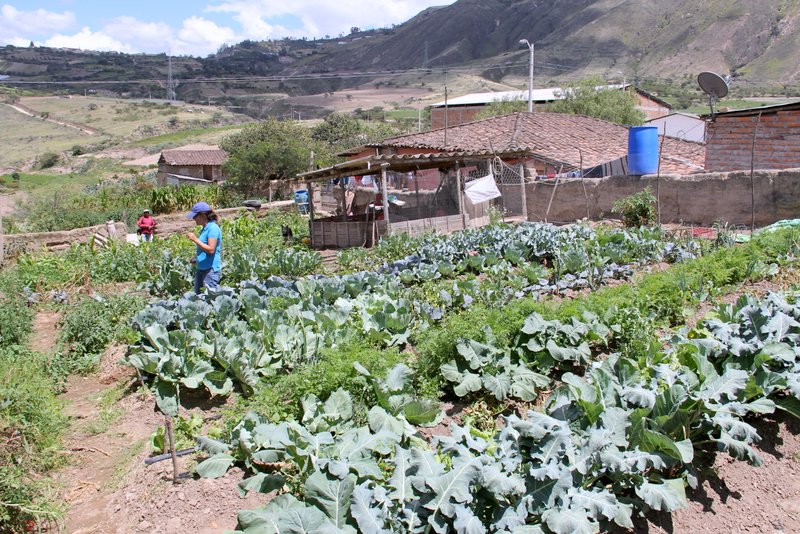 Kathryn Bright recently spent six months in Ecuador helping with the the South American launch of the Peace Education Program. In her travels, she re-visited the small town of Paragachi, where TPRF participated with funding to restore the city’s irrigation system. (See “Renewed Hope and Dignity“). This is Kathryn’s engaging follow-up report.

When I first arrived in Paragachi in mid-January, the hillsides were a lush green.  Cool, pleasant days followed nights of heavy rain that leaked through the tiled roof. The earth stayed moist. Gardens flourished. Cacti were laden with fruit. However, by May, the rainy season was ending, and a gradual transition from green to brown was well under way. The importance of an irrigation system to the rural village of Paragachi became glaringly obvious. Thick, wind-blown dust clouds choked the inhabitants of modest, concrete block homes. Fine powdery dirt buried the feet of travelers with each step along the dusty roads. 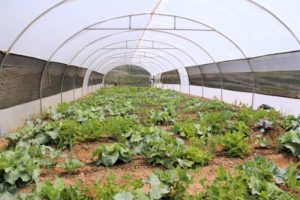 The community of Paragachi was the beneficiary of a 2011 TPRF grant to help restore a dilapidated irrigation system that now brings mountain water to one-hundred-and- sixty families. Fifty-six of those families participate in Tierra Viva, a project to improve family nutrition funded by the Vibrant Village Foundation and managed by the local Fundación Montañas de Esperanza – MdE (Mountains of Hope). The project provides seeds, humus, tools, and training in Grow Biointensive® organic gardening.

Although most Paragachi families use the irrigation water with traditional forms of gardening, each month more families are choosing to create organic gardens as they see the bountiful harvests of their neighbors. Some grow produce to sell commercially in a greenhouse irrigated with water from the renewed system. The ministry of Agriculture recently donated the greenhouse to Tierra Viva. Proceeds from the sale of produce help keep the project sustainable. 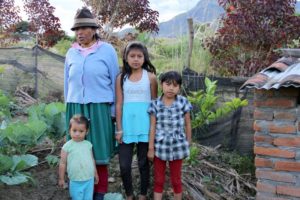 Cruz María López With Granddaughters in Her Garden

Cruz María López takes care of three granddaughters since their father died and their mother moved to another town to find work. She has a large garden filled with many types of vegetables and fruit trees. When asked how the irrigation water has benefited her family, she explained that before the TPRF grant, “We had to use costly tap water for our garden, but things are much better now.”

She is now able to grow a wider variety of produce and use the money she saves on water and food to buy clothes and school supplies for her granddaughters. On many days, even the municipal taps run dry for hours, and then the only available water comes from the new irrigation system.

One day in early May, I visited several Paragachi family gardens accompanied by Germán and Ximena, employees of Vibrant Village. In front of one home, we saw a large plot of dry dirt where Germán said a beautiful garden had thrived until a few weeks before. He explained that the adult son of the woman who lived there had plowed under her flourishing garden, admonishing her to return to traditional gardening because he did not trust the new methods or the gift of water. 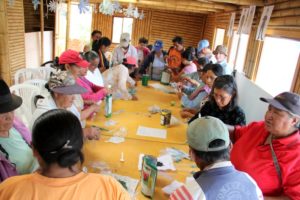 I later learned that many community assistance projects in the area historically end up incomplete and short-lived, causing more harm than good in the long run. In contrast, since the inception of the TPRF project, Paragachi families have been repeatedly amazed at its continuing success. Initial doubts have been replaced with gratitude. Residents fill to overflowing Tierra Viva meetings regularly held in the community room at Casa Paraiso (Paradise House), home of MdE’s offices. Those who attend the meetings not only receive seeds and guidance in planting, but also have an opportunity to express concerns and share successes.

The village was quiet during that particularly hot, arid morning when we visited the gardens. Most residents were laboring in regional crop fields and unavailable for interviews. But the gardens themselves told their own stories. A few showed evidence of their owner’s initial commitment to dig bio-intensive beds and install irrigation lines, but then the gardeners allowed the vegetables to go to seed and become nearly obscured by an overgrowth of weeds. Many gardens, like those of Clemencia Pupiales and Antonio Ríos, are well maintained and thriving, filled with abundant food to feed their families plus extra harvest to sell at the local market. 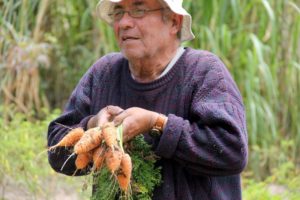 The gardens reminded me of old stories about how people receive good fortune in different ways. Some tentatively accept and plant the seeds of generosity but fail to nurture the tender plants to their full capacity. Some succumb to pressure to return to their old ways of barely getting by with limited resources. Others take time to prepare the soil, plant the seeds deeply, and nurture them with waters of love and gratitude until they have a thriving garden that overflows with succulent fruits.

The children of Paragachi told the best story. During an after-school art class at Casa Paraiso, Vibrant Village’s Education Director, Sue Brown, asked a group of students, ages 9-14, to take photos of nature’s “splashes of colors and textures” in a part of Paragachi known as Paraiso (Paradise). The results were astounding. After only a few minutes of instruction, using inexpensive digital cameras, the students captured stunning photos of flowers and plants, some of which did not exist in the community before TPRF’s water project.

One boy was so taken by what he saw that he exclaimed, “Wow! I had no idea that I lived in such a paradise! Pachamama [Mother Earth] certainly must live here among us!”  He had discovered a hidden paradise beneath a layer of dust in a community enlivened by the precious gift of water. 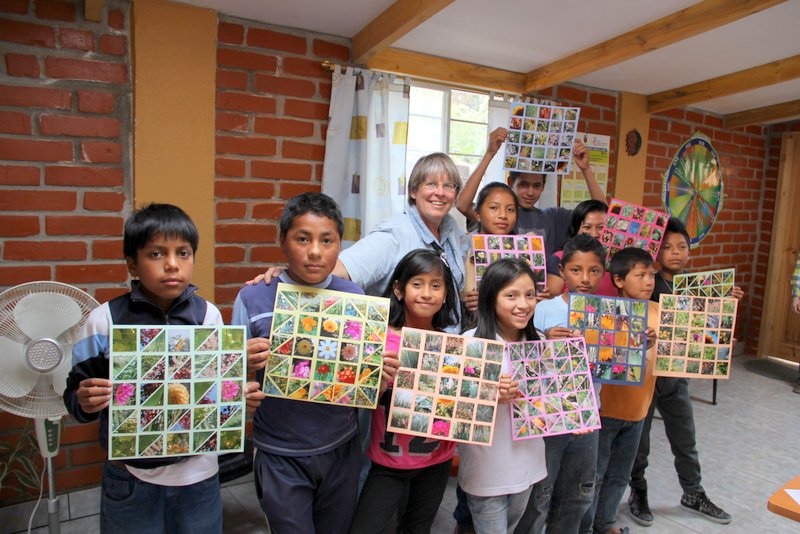