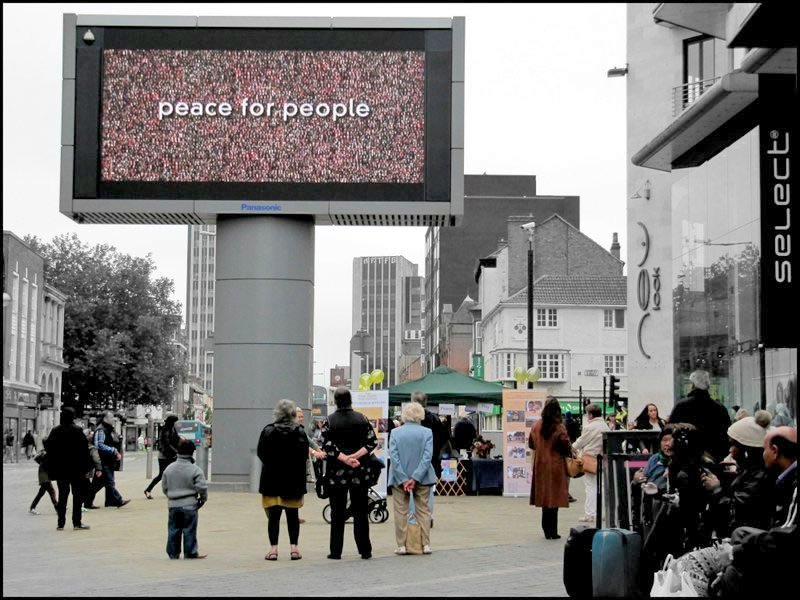 Artist Karen Livingstone lives in Leicester, England, having spent time in the United States, India, Australia and Europe, and earning an MFA at Yale. Karen worked successfully with a team of volunteers to make TPRF and WOPG videos and other materials an important part of Leicester’s Peace Day celebration. This is her story.

Like many UK cities, Leicester has had a Big Screen since the Olympics in 2012; it is located in the center of town in a busy shopping district.  For some time, I thought it would be a fantastic place for a message of peace from Prem Rawat to be shown.  Some people I knew agreed, and we began to look into what was involved. One person knew how to contact the people at Leicester City Council (LCC), so we had a good start.

International Peace Day seemed to provide the perfect setting for what we had in mind. I contacted LCC and was told that the content of the screen was up to the BBC and that LCC would be removing their screen by the 21st of September, International Peace Day (IPD).  LLC offered to send any material I submitted to the BBC, and, if approved, they would try to get it shown on the Big Screen before the 21st. 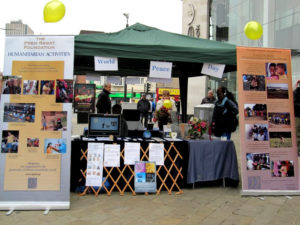 By the time we received the four short videos from TPRF’s Peace for People 2013 tribute, it was necessary to submit the material directly to the BBC, using the contacts LCC had provided.

Kamla Pattni, who was helping me with the Big Screen project, works for the LCC and expected the mayor to attend the market on the Festival Day. He did, and Kamla brought him over to the peace stall where he watched a DVD of Prem Rawat talking about peace. He was impressed enough with the video and materials at the stall to offer his help with any future projects.

This was just what we needed: a foot in the door–incremental progress!  Consequently, Kamla emailed the mayor about our efforts with the Big Screen Project, attaching links to the Introduction to the Peace Education Program, the four short TPRF videos, and the Peace Beats clip. He responded positively. She then rang my contact at LCC and, to her surprise, found that the BBC had already approved two TPRF videos for showing on the Big Screen.

Everything came down to the wire every step of the way. Kamla and I had to have fierce determination and tenacity, but it paid off. 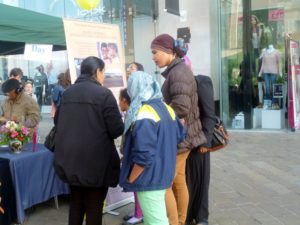 By the time we received the final formatted clips, we managed to get the plan improved to include all four TPRF clips, plus a video from Peace Beats. The material appeared on the Big Screen from Tuesday, September 17th, through Sunday, the 22nd, from 8:00 A.M. to midnight every hour. On Peace Day, we were allowed to have a gazebo at the foot of the Big Screen from 10:00 A.M to 5:00 P.M. for displaying WOPG and TPRF materials and cards, and for showing video clips on laptops and a TV.

The gazebo drew many people of diverse ethnicity and backgrounds, and generated a lot of local support. It was truly satisfying to see Prem Rawat’s message shown on such a large screen in a public place here in Leicester for the first time anywhere in the world. It all happened without incurring any advertising costs and only a minimal set-up cost of £100.00 for a technical person.

The display captured the imagination of the public so much that some of them were willing to stand in front of a video camera and express their views on peace! In the end, the response from the Council was so positive that they waived their normal fee for placing the gazebo on the public space, without even being asked!

A lot of people are now all fired up to do more! 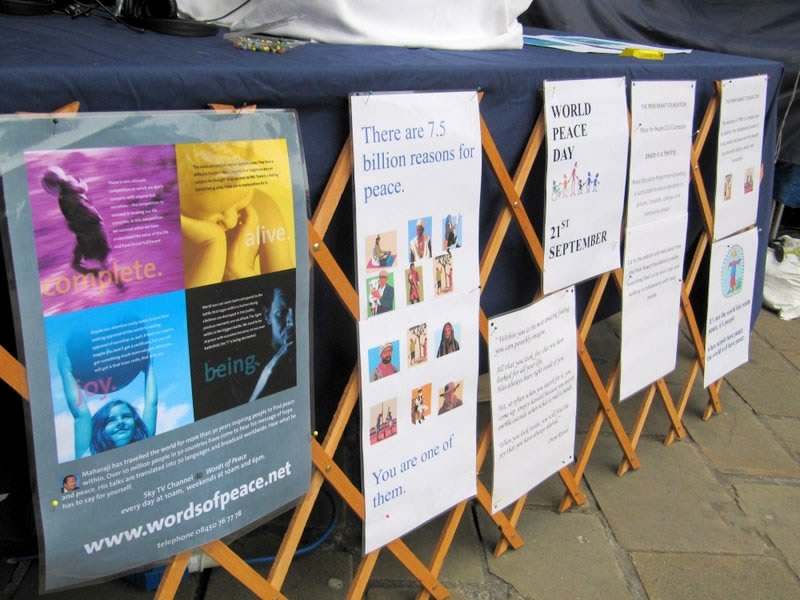