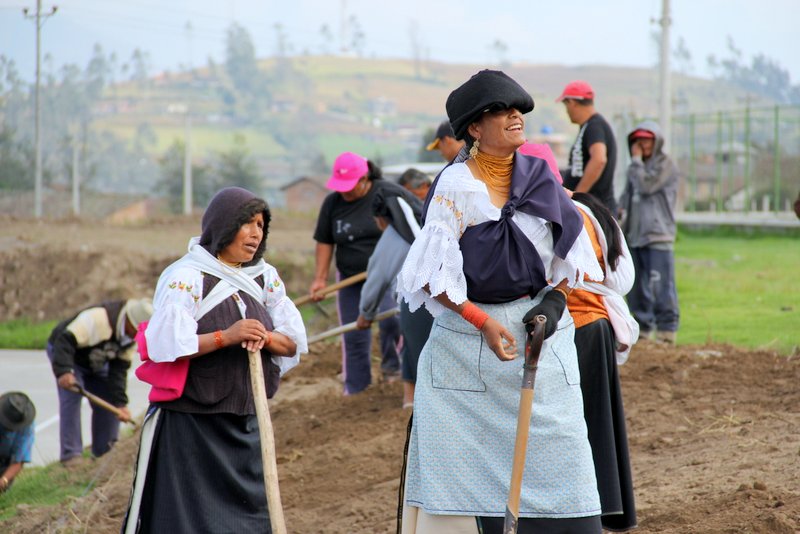 Guest Blogger Kathryn Bright spent six months in Northern Ecuador as part of a team helping to launch the Peace Education Program in South America. This is her report.

TPRF: You just came back to Colorado after 6 months volunteering in Northern Ecuador.  What inspired you to go there?

KB: I had been in Ecuador for a week last year, when I first saw the amazing land, the wonderful people, and what was already happening there in terms of introducing Prem Rawat’s message of peace.  I had the time and ability to go back, so I went, hoping to play a part in what I knew was extremely powerful and important work. 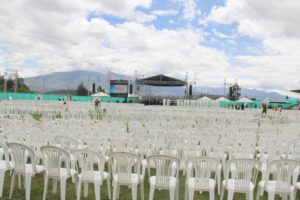 Little prepared me for jumping into this culture, with only two years of Spanish in high school and a few lessons on a computer language program.  Mostly, I learned through cultural immersion.  I appreciate how Ecuadorians warmly greet everyone, often with a kiss on the cheek.  I even find myself wanting to do that back home in Boulder.  There is such kindness and friendliness among the people.

TPRF: Did you go to Ecuador with a plan or did you just try to stay open to what you could do to help?

KB: I arrived in January with the hope of an event with Prem Rawat, but nothing was confirmed.  So, I helped look for venues, including outdoor stadiums.  We looked at big soccer stadiums, and a smaller one in Peguche where cows and sheep also grazed.  At first glance, I couldn’t imagine that a large public event could ever take place in that simplest of fields.  But it did happen there, with much help from the local people clearing the land and creating a beautiful site where 2,800 people, many for the first time, had a chance to see Prem Rawat live. 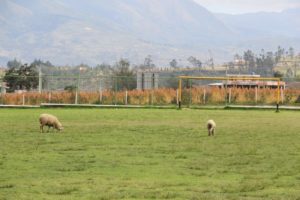 At the first minga—a coming together of community members to prepare the land for the event—I saw indigenous women in long skirts and white embroidered blouses, some with babies strapped on their backs, easily wielding heavy tools while chatting merrily with their co-volunteers.  I tried lifting one of their tools, but found it too heavy for me.  For a while, I simply watched and admired the natural teamwork of these women, men, and even youth from a nearby school who willingly volunteered their time that day. Their spirit of giving was quite striking.

Then, a couple of ladies came with food—a large bucket of chicha (a traditional rice drink) and buns containing only a small slice of soft queso (cheese) for each of the workers.  The women let me hand over food or a cup of chicha, showing me which of the elders to serve first.  My heart was touched as each person genuinely thanked me for this little bit of nourishment.  I felt incredible humility and gratitude for the chance to help in such a simple way. 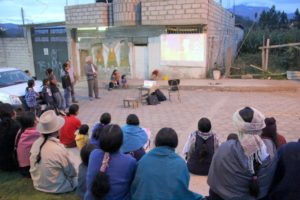 I also helped organize several events of various sizes to introduce the message of peace and the upcoming peace festival.  Once we even showed videos in the street of a small neighborhood near Peguche.

Two days before the Peguche event, there was another event with Prem Rawat in Ibarra, attended by 450 people, including key government officials and educators.  This “Latin American Launch of TPRF’s Peace Education Program” (PEP) was co-sponsored by the Department of Education of Imbabura Province and TPRF. We worked closely with department staff to invite people who might be interested in applying PEP in the educational system nationwide.

It was exciting for me to attend four sessions of the first PEP to use the Latin Spanish translation that had just been completed the day of our first workshop. All of the participants also eagerly volunteered at the launch event. 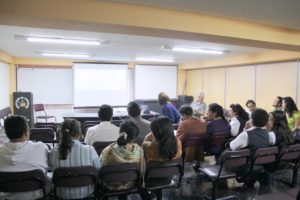 TPRF:Is there anything else you would like to add?

KB: I would love to see a center in Otavalo where local volunteers can show videos of Prem Rawat translated into Kichwa. Many people in the pueblos only understand the indigenous Kichwa language, though most people under thirty-five know Spanish, too.  It would be wonderful if this community center could sponsor PEP classes so that more people in the region can have the opportunity to discover the possibility of personal peace.  People there have a real openness to this message.

Ecuadorians surprised me with their natural curiosity and ability to listen without being distracted.  I delighted in watching their faces light up when asked how they enjoyed the events.  Personally, I want to keep that feeling of gratitude alive for all I learned from so many generous volunteers about simplicity, humility and focused heartfelt presence.

In her next blog, Kathryn will follow up with her personal experiences of how a TPRF water project grant has continued to benefit the local population in the village of Paragachi, Ecuador. 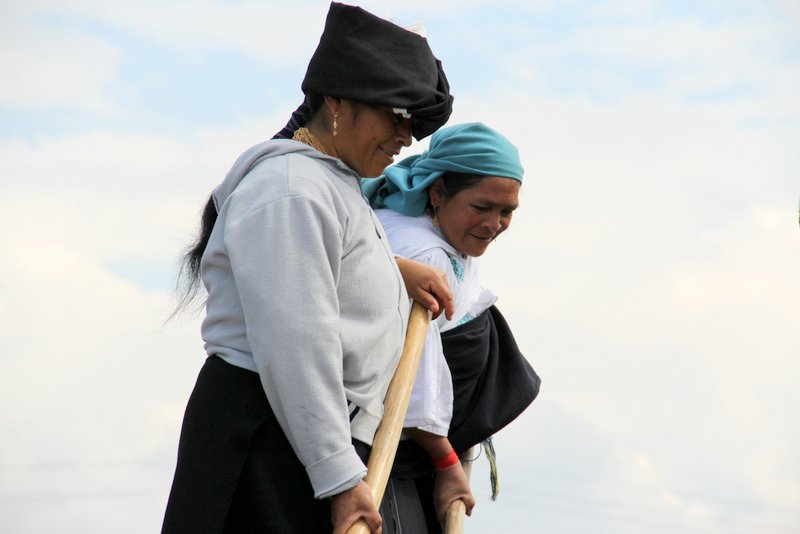