The Food for People Story

Taking an innovative approach to helping people in poverty-stricken communities, TPRF has developed Food for People (FFP), a model program that provides clean water and hot nutritious meals in the local cuisine to children and ailing adults. Watch the video and read below to learn more about how this program is changing lives.

In the Spring of 2003, Prem Rawat arrived by helicopter in Jharkhand, India, to speak to a large crowd gathered for an outdoor event. Jharkhand is one of India’s poorest states, with a harsh terrain that makes navigation by car nearly impossible. Only one quarter of its 32,000 villages have roads, and only 8% have electricity.

When the helicopter landed, Prem Rawat was greeted by a number of curious children from the nearby village of Bantoli. Although the children appeared underfed and destitute, their cheerfulness and spirit touched him deeply.

As he inquired about their situation, he learned that these children, under the age of five, have twice the mortality rate of those in the rest of India. Often, there is so little food in the village that the adults become sick and cannot work. No work means no food. It is a setup for a cycle of poverty with no end.

The children’s plight fueled Prem Rawat’s desire to help. His vision was simple:

In 2006 the first program implementing this vision opened in Bantoli, India. Prem Rawat hoped that this consistent, daily nourishment could be a “leg up” that would allow the community to rebuild. He called his model program Food For People (FFP).

Since that time, two other facilities have opened, one in Nepal and one in Ghana. Improvements that were never imagined are happening in those communities. 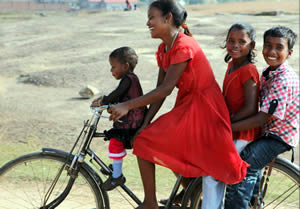 In 2006, TPRF partnered with the local Premsagar Foundation to open its first Food for People facility in the remote village of Bantoli, a tribal area of Jharkhand in northeast India.

Here, children grow up in simple huts with dirt floors. Rocky soil yields little food, and most able adults perform grueling manual labor to feed their families. Sending their children to school consistently is rarely an option for these families, which perpetuates the cycle of poverty even further.

However, the situation is changing. Each year, FFP serves over 100,000 hot, nutritious meals to children and ailing adults from the seven villages surrounding Bantoli. Because of this regular, good nutrition and the accompanying basic hygiene education, children of the area have become healthier and their parents are allowing them to return to school.

Previously undernourished children are seen skipping to the FFP facility with smiles on their faces before heading off to school. Teachers who bought food with their own money to feed their starving students now see children who are attentive throughout the day and eager to learn. School officials are thrilled that school enrollment and attendance continues to grow dramatically.

Most importantly, students are envisioning how they can help their villages by continuing their education to learn new skills. Recently, a graduate of Bantoli’s secondary school became the first child from this entire area to qualify for advanced education in the state school system.

Correspondingly, ailing adults have been able to return to work to support their families, and good hygiene practices that are learned at FFP are carrying over into homes and helping to prevent further sickness.
As a result, crime has decreased significantly in Bantoli, and there is a sense of shared pride and hope building in the community.

Before FFP, the desperate economic outlook drove people to steal firewood from their neighbors, which led to violent fights. Many children were involved in such petty thefts. As desperation for enough food has diminished, crime has become a rarity, and people feel more confident about finding work to earn money for what they need.

Said one Bantoli resident, “Now bundles of firewood and other things are left in the yard and they are safe. Nobody steals them. This is a very significant change.” 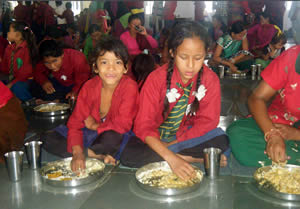 In the early morning hours, activity stirs in the FFP facility located in the small village of Tasarpu, set in the rugged mountains near Katmandu, Nepal.  Staff members are preparing to feed 500 school children and 100 infirm adults. This has been the daily routine for over three years in this mountainous area where subsistence farming rarely provides enough food for nine months.

The kitchen, dining room and toilet facilities are sparkling clean. The staff, who live in the village or in the new FFP housing structure, are cheerful and welcoming.

FFP opened in Nepal in 2009, in partnership with Premsagar Foundation Nepal (PFN). Since then, the local school has seen a significant rise in enrollment necessitating the addition of a new grade each of the last 3 years to accommodate increased demand. After the first year, the elementary school principal reported that school attendance had climbed from 40% to 94%; enrollment had more than doubled; and the dropout rate was less than 5%.

Children no longer need to work all day for food or leave school hungry in the middle of the school day. Prem Raj Dhungel, a professor of physics at Tribhuvan University and Vice President of PFN describes the situation further. “Children were skipping school to help their parents with household chores,” he said. “They had to travel long distances, up and down the hills, many times, to fetch water, look after the domestic animals, and take care of their younger siblings. With no one to prepare a morning meal for them, they either went to school hungry or not at all.”

In Tasarpu, the passing rate for the National SLC (School Leaving Certificate) examination is now 61% compared to the national average of 47%. This is the second highest in the district. (The passing rate of another secondary school in the same district where only a few students come to FFP is 24%).

Recently, seven Tasarpu students received grants to continue their education past the normal grades, thanks to the generosity of patrons of PFN. Premsagar has also donated two computers to the local schools, giving computer access to the students for the first time.
The Social Welfare Council (SWC), a government body that regulates nonprofit organizations in Nepal, recognized Food for People as an “innovative intervention” and “exemplary model” in literacy programs.

The SWC said, “Not only has the quality of education improved, but standards of hygiene have risen both at school and in the home. The physical infrastructure, funded by TPRF, has mobilized local skills and labor, and this, along with the regular purchase of vegetables at market prices, has made a significant contribution to the local economy. Parents have gained new agricultural skills, and, with their children attending school, have more time to engage in income-generating activities.” 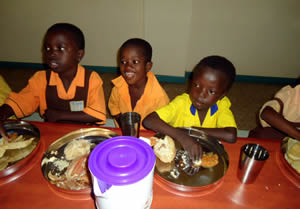 With FFP thriving in both India and Nepal, the decision was made to expand the program to another continent. The village of Otinibi, on the outskirts of Accra, the capital of Ghana, was chosen partly because of the hardship of its 1,500 residents.  Most are farmers by trade, but due to poor soil conditions and unpredictable weather patterns, there is rarely enough food grown to sell. The strongest residents often work for food by breaking up rocks for road building.

The FFP facility is located near the Otinibi school, on land donated by Chief Nii Adjei Kweidzamansah III The beautiful new facility has been in operation since May 2012 and is managed by the local Prembaf Ghana Foundation. The number of meals served each weekday reached 400 in September and is steadily climbing. On the weekends, meals are served to the elderly who have few resources.

As in Bantoli and Tasarpu, school enrollment is on the rise, and teachers report increased attention from their students. According to Grace Ninsaw, Headmistress of the primary school, attendance rose dramatically in the first six months since FFP’s opening. “And because of the wonderful nourishment, we have seen a marked improvement in academic performance,” she added.

By now, the children have become accustomed to the routine of washing their hands, lining up for their plates of food, and then returning their dishes to be washed.

Joseph Nartey, a ten-year-old boy in Class Five, comments, “Before the FFP feeding program, I was afraid as each school day approached because sometimes there was no money to take to school to buy food during break time. Now, I am not afraid of school days because Prembaf always gives us good food.”

Kate Nagetey, a staff member of Prembaf from a village near Otinibi, does cleaning at the facility. She said, “This FFP project has saved people from poor homes. Now the children can focus on learning and have become active. The project has helped many children to attend school, but it has also helped some old folks to survive. I wish I had such an opportunity when I was attending school.”

When Prem Rawat visited the facility in November 2012, Otinibi Chief Nii Adjei Kweidzamansa III offered more land to FFP to develop an organic garden. Speaking to Mr. Rawat, he said, “I knew this area before, and I have personally seen the success of what it has now become. It is so very positive for the people in Otinibi. Prem Rawat, your name shall never vanish from the history of Ghana.”

Message from the TPRF Board

Linda Pascotto and the TPRF Board provide an update on how the Foundation is adjusting to the challenges caused by the COVID-19 pandemic. 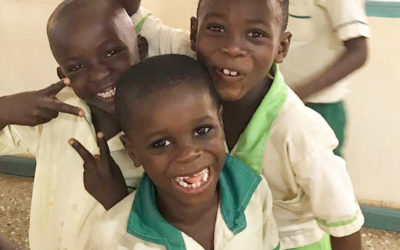 Chief Niadjekwei Jamansah expresses his great appreciation for the Food for People program, which has improved health, school achievement, and the economy in his town of Otinibi, Ghana. 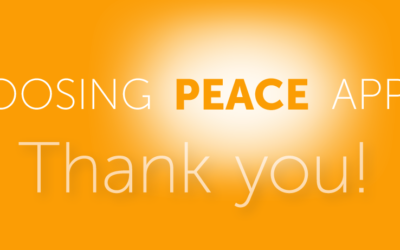 Contributors showed strong grassroots support for The Prem Rawat Foundation (TPRF) during the December “Choosing Peace” appeal, exceeding the goal of $150,000 and raising $192,839 for initiatives that will help people across the globe live with dignity, peace, and prosperity.