Clean water is an essential ingredient for a healthy life.  One in eight people in the world live without it.  The problem is widespread in African countries. Tanzania is located on the eastern coast of Africa.  While the country is bordered by three of the largest lakes on the continent, many areas are very dry, with little opportunity for agriculture. Less than half of the population of 39 million have access to running water for sanitary purposes.  Only 62% of the population have access to fresh water wells. On average, women and children spend over two hours a day collecting water. Treks of six to seven hours are not unusual in some rural areas.

TPRF has worked for many years with partner WaterAid to help people in countries around the world gain better access to clean water for drinking and sanitation. In 2010-2011, TPRF gave a grant of $25,000 to WaterAid to improve the situation in Tanzania. The following excerpt from a recent WaterAid report illustrates how the effort has made a life-changing impact in the small village of Kibiagwa. 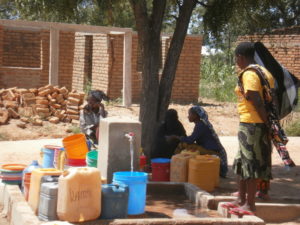 “We visited Kibaigwa to see a different approach to water supply management and to determine the long term impact of the water improvement program there.

“Kibaigwa, located in Eastern Dodoma with a population of over 26,000, is one of Tanzania’s fastest growing settlements. Kibaigwa is surrounded by a fertile hinterland suitable for growing groundnuts, sunflower and maize, which is the main staple food in East Africa.

“WaterAid, in collaboration with the local government, helped to implement the Kibaigwa water supply and sanitation project in 1998 – 2000.  We found it amazing to see how the program had grown after ten years. To ensure long-term viability of the program, it was important to leave an effective management structure in place. WaterAid organized and oversaw the formation, training and registration of a Board of Trustees to manage the program in a sustainable manner as a non-profit group.

“Since the beginning of WaterAid’s project in Kibaigwa, the Board of Trustees has been able to expand the clean water network by increasing the number of communal water points from 24 to 46, increasing private connections from 3 to 339, and drilling one additional borehole fitted with a new pump. As a result, water supply is more efficient and is now available 24 hours a day. Revenue collection is also more effective because clean water connections are metered. In addition, new regulations prohibit people from washing items directly under the tap because this wastes water and is a bad practice for environmental hygiene. 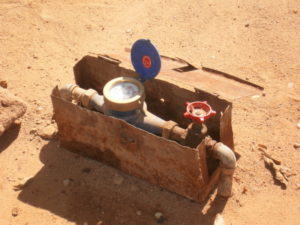 “Due to the increase in revenue, the Board is now able to help finance the construction of new classrooms and a Clinical Officer’s house. Health and welfare services are now available to institutions like schools and clinics at a subsidized cost. These services include the supply of 40 liters of water per day free of charge for people living with HIV. The increased revenues have also made it possible to provide a supply of clean water to the nearby village of Kinangali.

“The Kibaigwa clean water program has become a model for many community groups in the area. A Water Engineer and Assistant Administrative Secretary with the Dodoma Regional Secretariat said recently, ‘This program has bonded the beneficiaries to the utility…In Kibaigwa, a drop of water is respected by every village resident and any burst pipe is reported immediately.’”