The development team reached the first milestone towards building the Food for People center in Ghana by completing the documentation necessary to transfer the land gifted by the Chief for the facility. Kafui Esi Adjei sent this report describing the ceremony held to commemorate the occasion.

Initially, the team thought of holding a groundbreaking ceremony. However, we realized that if we did that, the expectations of the people would be very high. The villagers would expect to see the building immediately. However, we know that it will take a considerable amount of time to clear the land, complete the architectural drawings, and begin the building. 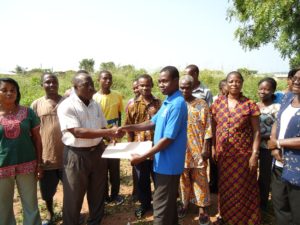 Handing Over the Land Document

So we thought it would be wise instead to make a small ceremony out of the handing over of the land with pictures for all to see. My husband, Emmanuel Adjei, made a short speech in which he acknowledged that many non-governmental organizations in this part of the world make all sorts of promises, but when they finally secure funds from their donors, they squander the money, dashing the hopes of the would-be beneficiaries. Emmanuel assured the villagers that this was a genuine project, which seeks to make life a little better for the school children of Otinibi and the people in this area. He told them that pictures would be taken and sent over the Internet, along with photocopies of the land documents, for all the supporters of TPRF around the world to see.

After the “handing over,” we went to greet the chief of Otinibi, Nii Kweidza Mansa III at his residence. He is very glad about the upcoming project. He noted that initially, he thought this was another hoax, as many NGOs come with such promises and do not come back. He said he was actually speechless when he realized that TPRF had good and genuine intentions and was determined to carry them out. He expressed his willingness to help in any way to make sure this project is successful. He reminded us that most Ga chiefs had sold their lands to investors, leaving the villages poor in resources. Now he felt that Otinibi’s policy of not selling land indiscriminately had been rewarded, because otherwise this project would not be taking place for this and future generations. He was thankful for the opportunity.

A Message from the chief of Otinibi, Nii Kweidza Mansa III

After the ceremony, I saw some school children sitting on the ground, on tree roots, and other uncomfortable places for their lunch. They were eating plain rice with no sauce, fried yam with no fish, or Kenkey with raw pepper and no fish. One child was eating from a plastic bag. I explained to them that very soon they would have the pleasure of eating in a secure and clean environment and that they would learn table manners and have very nutritious meals to enjoy. When I suggested that they would experience a complete change in their lives when the FFP began serving, the children responded as one with a cheer. 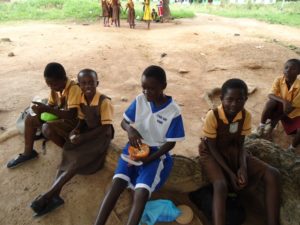 Children Eating Food on the Ground 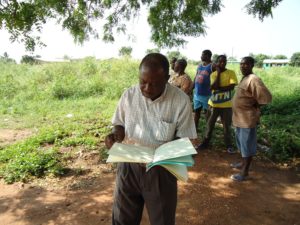