The Healing Power of Vegetable Gardening 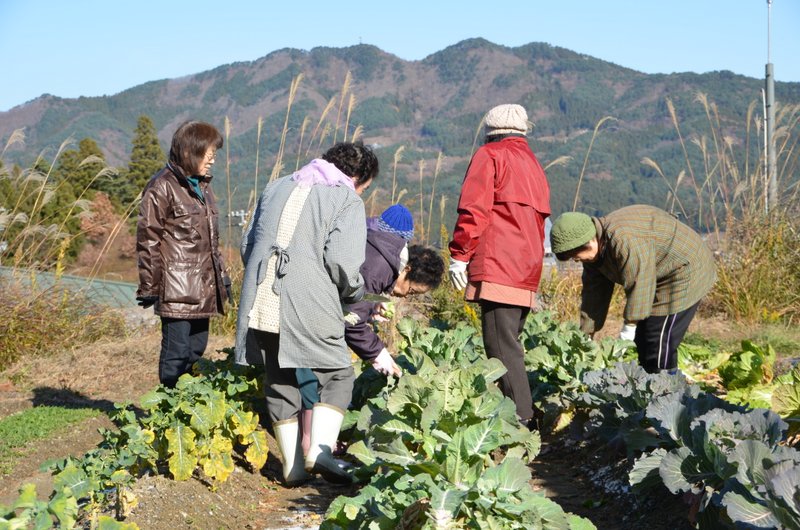 After the earthquake in Japan, TPRF funded a vegetable gardening project organized by its partner, AmeriCares.  This first-hand report from Ramona Bajema, Senior Program Manager/Japan, describes the project and the health and well-being effects it had on a group of evacuees relocated to temporary housing after the quake.

What: Cabbage harvest and pickling party with more than 25 residents in attendance 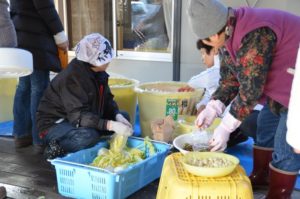 An hour before the event started, almost 20 Mobiria residents gathered to harvest cabbage and make tsukemono (pickled vegetables). Women who had participated in the garden project from the beginning attended as well as new members.

The scene at the community center was full of activity and fun. Some residents, including one 98 year-old woman, stood behind a truck and peeled a pot of garlic to put into the tsukemono. Others debated the pros and cons of adding daikon leaves to the mixture. They decided to go ahead and add the leaves to avoid waste and to add a special flavor. The daikon leaves had been left out to dry for several days to make them ready to be covered in the large pickling pots. The project staff used tsukemono “stones” (normally used to weigh down the vegetables while they are pickling) to do arm exercises, garnering tons of laughter.

I recognized one of the new garden project members as someone I met in October while she was taking a stroll by the garden. Another staff member and I had encouraged her to join the group. I was very glad to see her at the cabbage event. 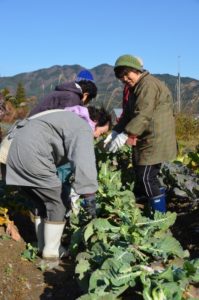 It had snowed the day before, but the weather on December 3rd was gorgeous. Several women noted that there was not a cloud in the sky. A bright blue expanse covered all of Hirota Bay and what remained of Rikuzentakata city after the earthquake.

The group trekked back up the hillside to the site of the vegetable garden to harvest more cabbage and a kind of “potato” that is eaten raw and tastes like an apple.  By now, all the snow on the cabbage had melted away. Group members also harvested carrots, broccoli, and cauliflower. They pulled out dead eggplants.

When the group drove to the bottom of the hill again, staff members divided the harvest into bags for everyone to take home.

The pickling adventure carried on. Everyone hoped that the tsukemono would be ready in time for O-Shogatsu, the New Year’s tradition celebrated at home with family. Food is the center point of the New Year’s celebration.  Pickled vegetables are an important part of the meal. Members prepare the vegetables days in advance so that no one has to cook during the New Year’s holiday. While the group would be living in temporary housing again this year, they would at least eat vegetables that they had grown and harvested themselves.

With the pickling preparation over and clean up done, we all went inside the community center. Some of the staff members made amazing cabbage with soy sauce for the group to snack on. The group also ate mikan, Japanese tangerines that are a common winter snack. At most community service gatherings, the staff served salty or sweet snacks to go with the tea. On this day, however, the emphasis was on fruit and vegetables from the garden. 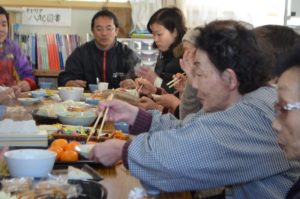 I have observed many of these gatherings of elderly women having tea in the community center. On this day, they all joked and talked in a lively way about their pickling activity.  It was a spirited group engaged in conversation rather than a few silent participants. One woman mentioned they had become a special kind of “Mobiria tribe,” which made everyone laugh. They were proud to share the harvest from their garden. Their cheeks were fresh and pink from being outside and their spirits were certainly much brighter.

One woman, who usually attends to her small grandson, was present at the gathering. She often came to the gatherings, but rarely participated. She merely sat and drank tea. On this occasion, she was one of the pickling leaders who cut the daikon, placed the leaves in buckets, and explained to new members how the daikon grew. She appeared completely different from other events, thanks to her role as one of the leaders in the garden group. Whereas she had had a difficult time walking around Mobiria in the previous year, she seemed spry and very genki (in a good state and mood.) It was a delight to watch her and remember how she had been just a short time before. 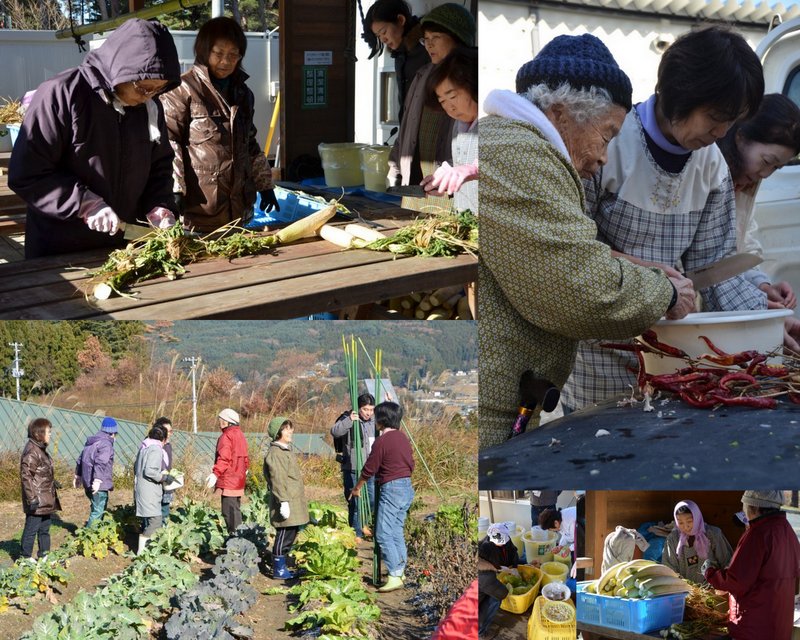