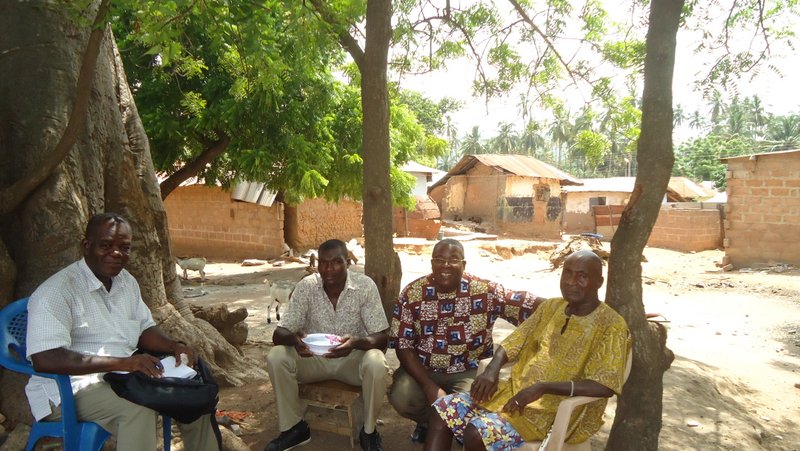 Alex Wiredu has undertaken the fascinating task of learning about the history and daily lives of the people served by the Food for People program that opened in Otinibi, Ghana on May 15, 2012, almost one year ago. Alex’s co-worker, Francis, is a photographer who has documented the development of FFP in Otinibi since the acquisition of the land it is built on. Soon a film crew will go to work to interview participants in FFP, or the Canteen as it is known locally. What follows is only the beginning of an ongoing story.

Francis and I went to the village again on May 7, to further look into which people to interview and to build their confidence to face the cameras. When we arrived at the facility, around 11:00 am, the cooks were preparing “banku,” a local food made from cooked fermented corn and cassava dough, served with the main meal. 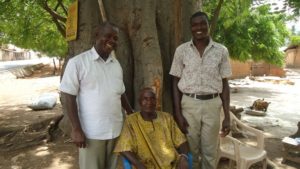 We proceeded to the house of a 94-year-old man, Dorfur Tetteh, to find out how he was doing. As we came to his house, we saw him sitting under a huge baobab tree enjoying the mid-morning breeze. He offered us chairs, and soon we were deep in conversation. We didn’t know that he was the chief priest of the village until he told his story and, along with it, the story of how Otinibi came into existence.

Francis asked where the first people to live in Otinibi came from, and Dorfur began his story. “We have six clans forming the Ga tribe: Osu, La, Ga, Teshie, Nungua, and Tema. All these clans lived along the coast of the present day Accra, and their main occupation was fishing.

Being fed up and tired of always having fish as their main meal, compounded with petty squabbles that were going on, a group of three men and a woman decided to move inland. These were their names: Adjei Kweigyanmansa, Sowah Okumose, Nii Ayi Ampah, and their sister, Atwe. They were fishermen who needed a change.

They kept moving inland for months, roaming through the thickets. In time they discovered a natural pond, if not a small lake. Knowing water was key to their survival, they pitched their camp close to the lake on land that is called Otinibi today. 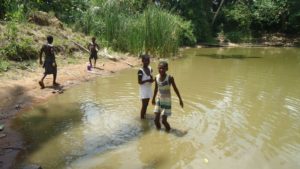 Because the lake never dried up even in the harmattan (dry wind) season, it was perceived to be a god. They worshiped it, as it became the source of their livelihood. Sowah and Kweigyanmansa shared the chieftaincy position. Nii Ayi Ampah became the first chief priest, and I am third of that lineage. That is why I had the authority to advise our immediate past chief, who has recently passed on, to offer the land for the facility.

And so we asked how they came by the name “Otinibi.” Dorfur explained, “When the four first arrived at the lake, there was an adjacent hill that was so bare that they called it eti a eni nwin, which means “a head without hair.” Over time the name has been corrupted to become Otinibi.”

When asked what kind of work the people did after settling, he replied, “Farming, of course. We cultivated maize, yam, cocoyam, plantain, and other vegetable crops. On market day we would exchange our crops for fish and other commodities.” 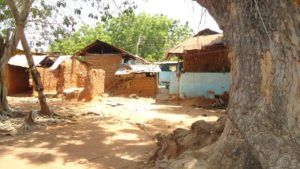 When asked how people work today, there was a certain sadness expressed. “It is a pity what modernity has done to us. In the old times you could eat at your neighbor’s hut without any problem, but today people are so greedy they do not even share with their neighbors. If they do, with the least provocation, they will use it to insult you. That is why I am very happy that this canteen is situated in my village. There you can eat in peace without thinking of any consequences.

“We are very happy to have this canteen in this village. The beauty it has brought to this village words cannot express.” 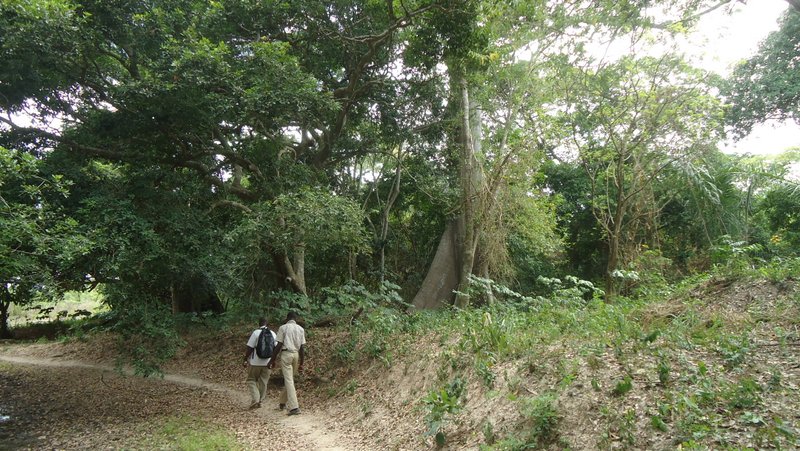 Path to the Lake